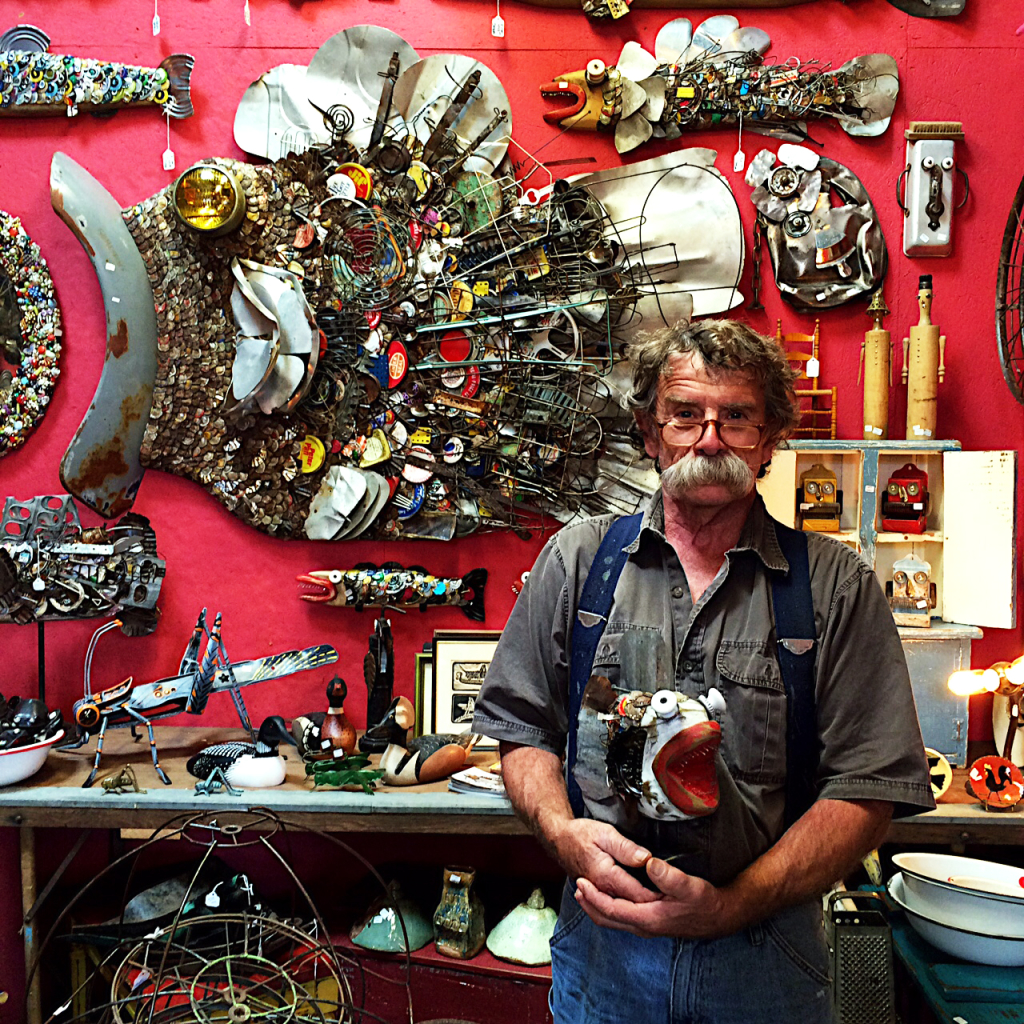 We couldn’t be more tickled to have folk artist Steve Meadows filling out a booth here at Kudzu Antiques, and if you’ve been by lately, you too have probably been tickled by Steve’s whimsical upcycled art creations. Pretty much everything Steve makes is from found objects, but instead of reading as a pile of junk, his work stares back at you with quirky faces made of old insulators, door knobs, brooms, and bread pans. In fact, his productions will have you intently studying and eventually in awe of what was used to create it, and that’s why its so charming. 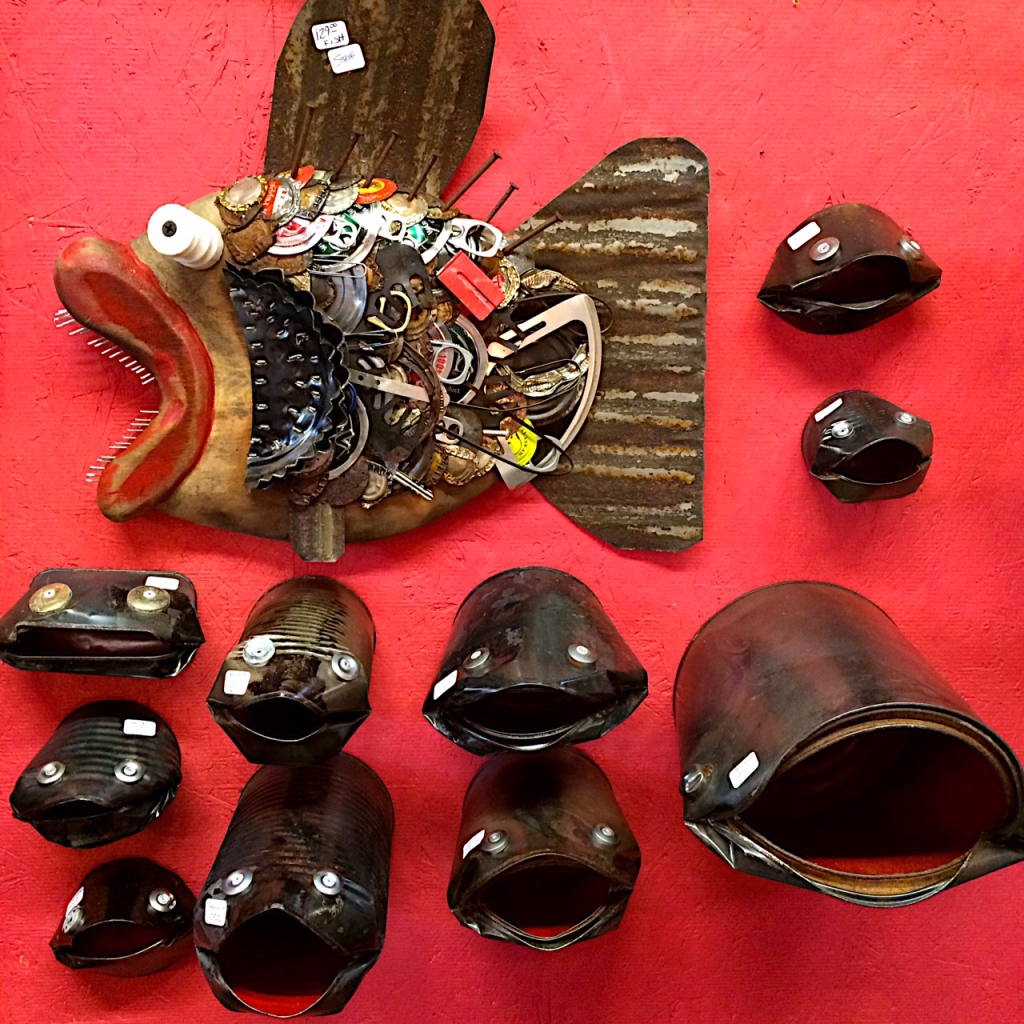 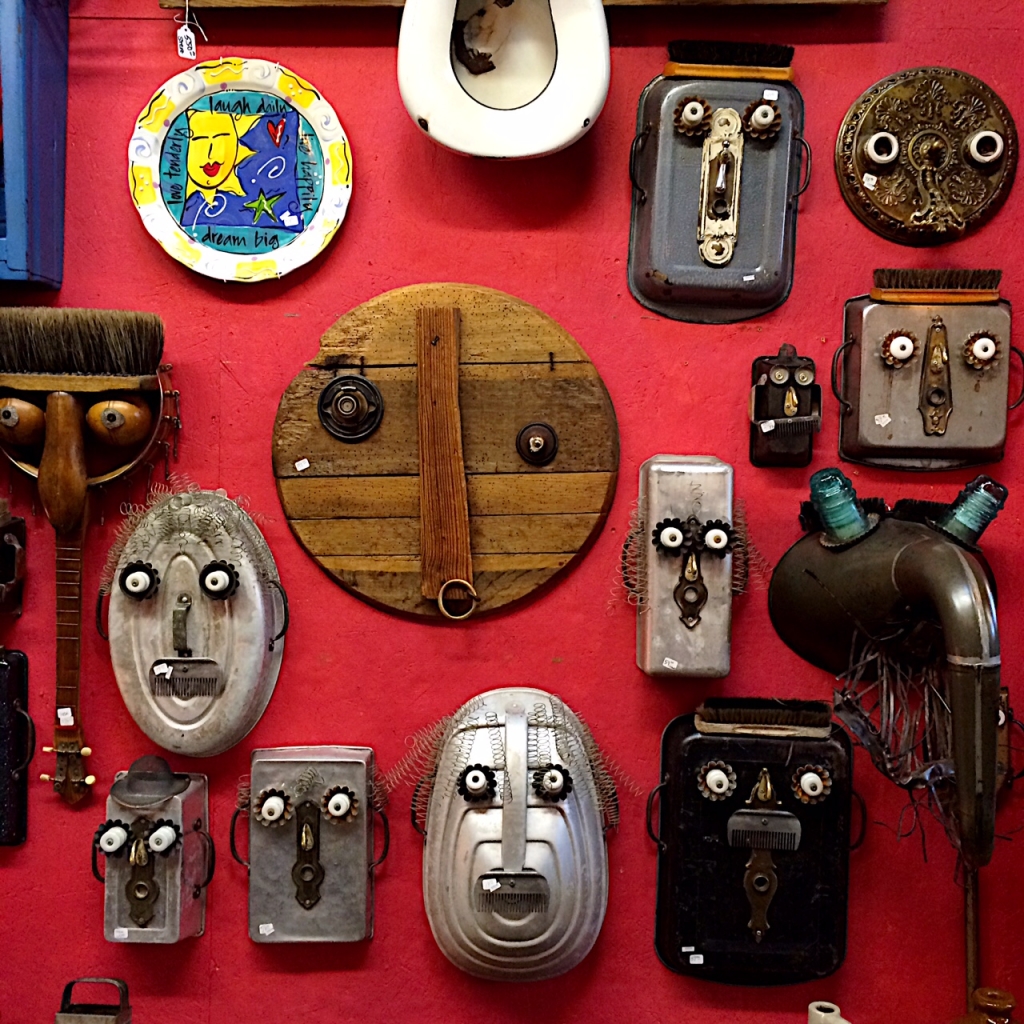 Steve initially went to college to be an architect and even ran his own construction company for a spell afterwards. His first foray into art-making was with primitive wood carvings and making cabinets, benches and small tables from wood scraps. He had always dabbled in working with metals, and twelve years ago, upon a significant birthday, Steve decided to commit to his recycled art because it was “more fun” and “humorous,” and that’s how he wanted to spend his time. 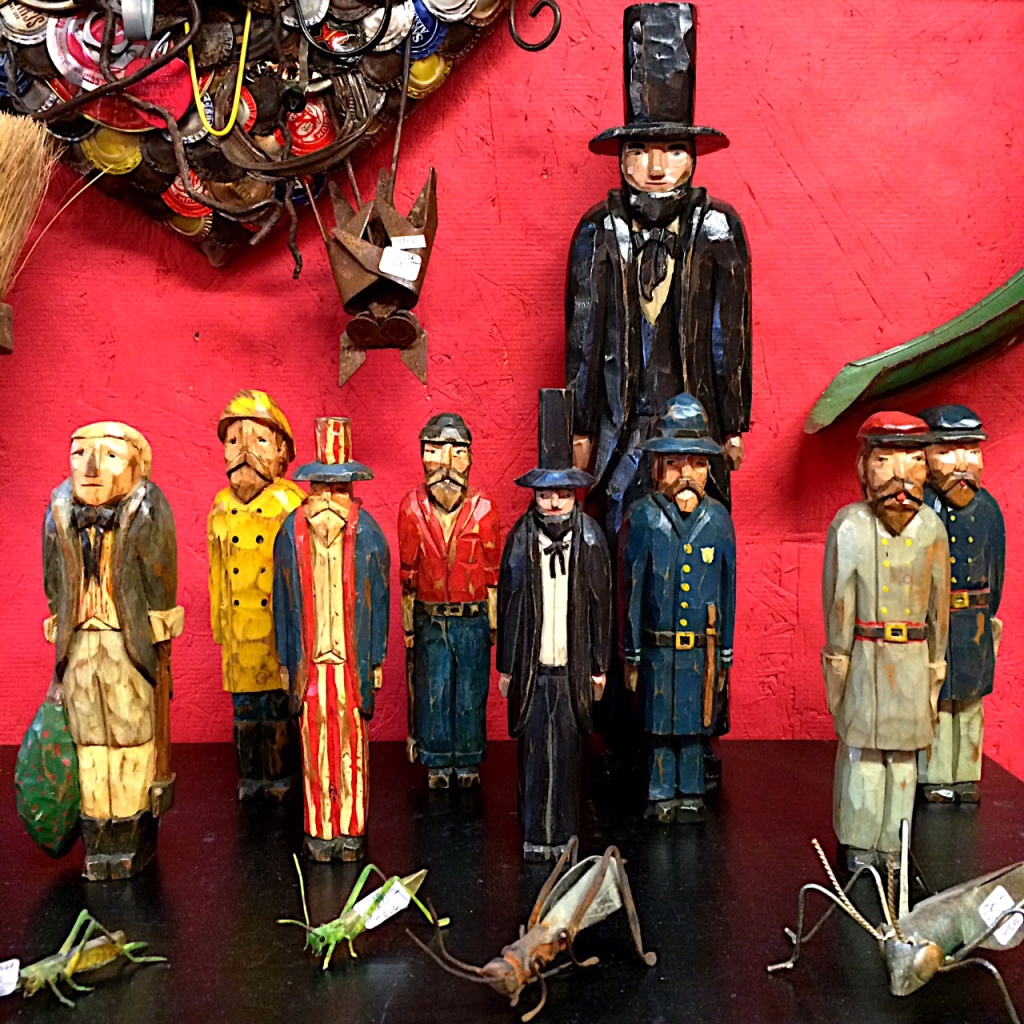 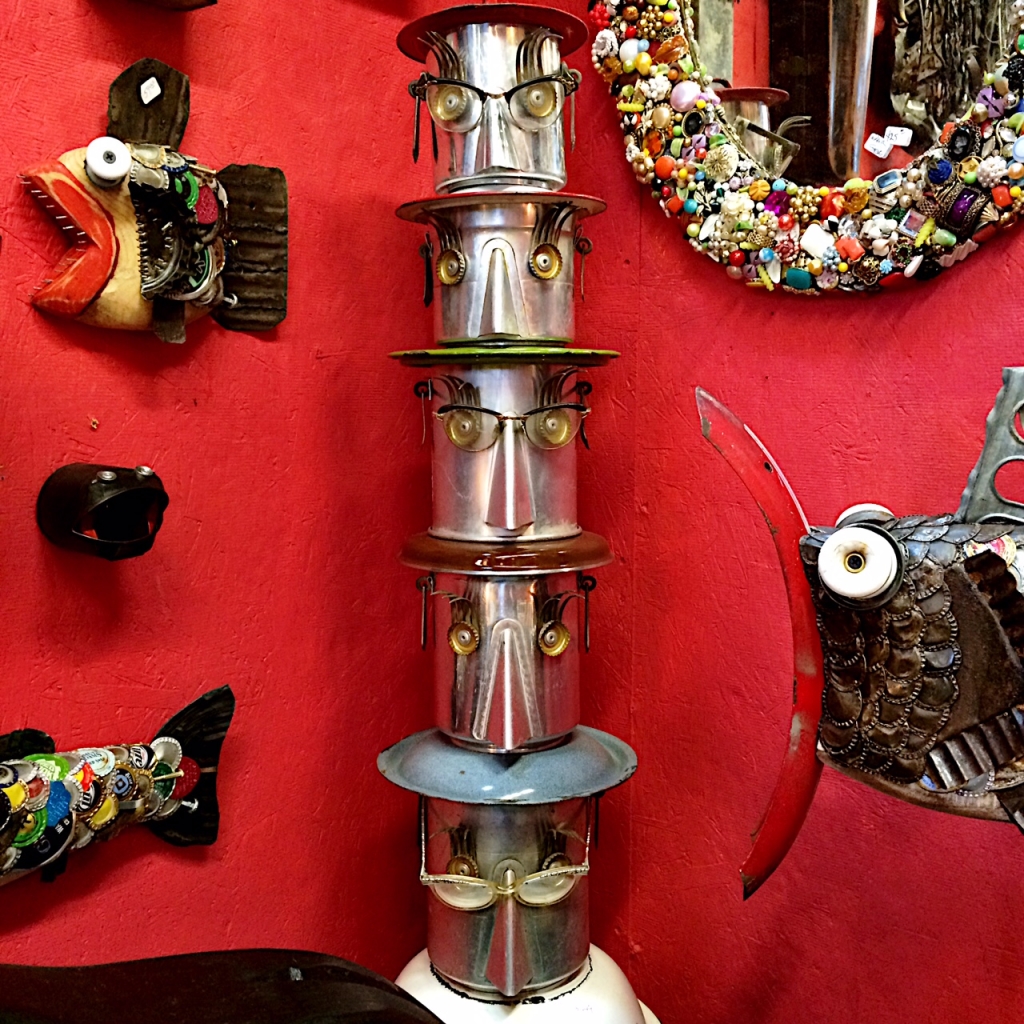 One of Steve’s first signature creation: a “Pothead” totem.

Due to his intense travelling schedule and with limited time to physically make pieces, Steve acts as a one-man assembly line, creating up to twenty creations at a given time. He finds his materials in bulk or, since he travels with a metal detector, scavenges whatever parking lot he happens to be in. He prefers the “real skunky” objects, and in a lot of cases intervenes in their deconstruction: burning, smashing, or intentionally rusting bottlecaps, rake tines, tin lids and the like.  His methods produce similar looking works, but each item is distinctly one-of-a-kind due to the unique composite of random materials. Ask him how he puts it all together, he simply replies, “God shows me things.” 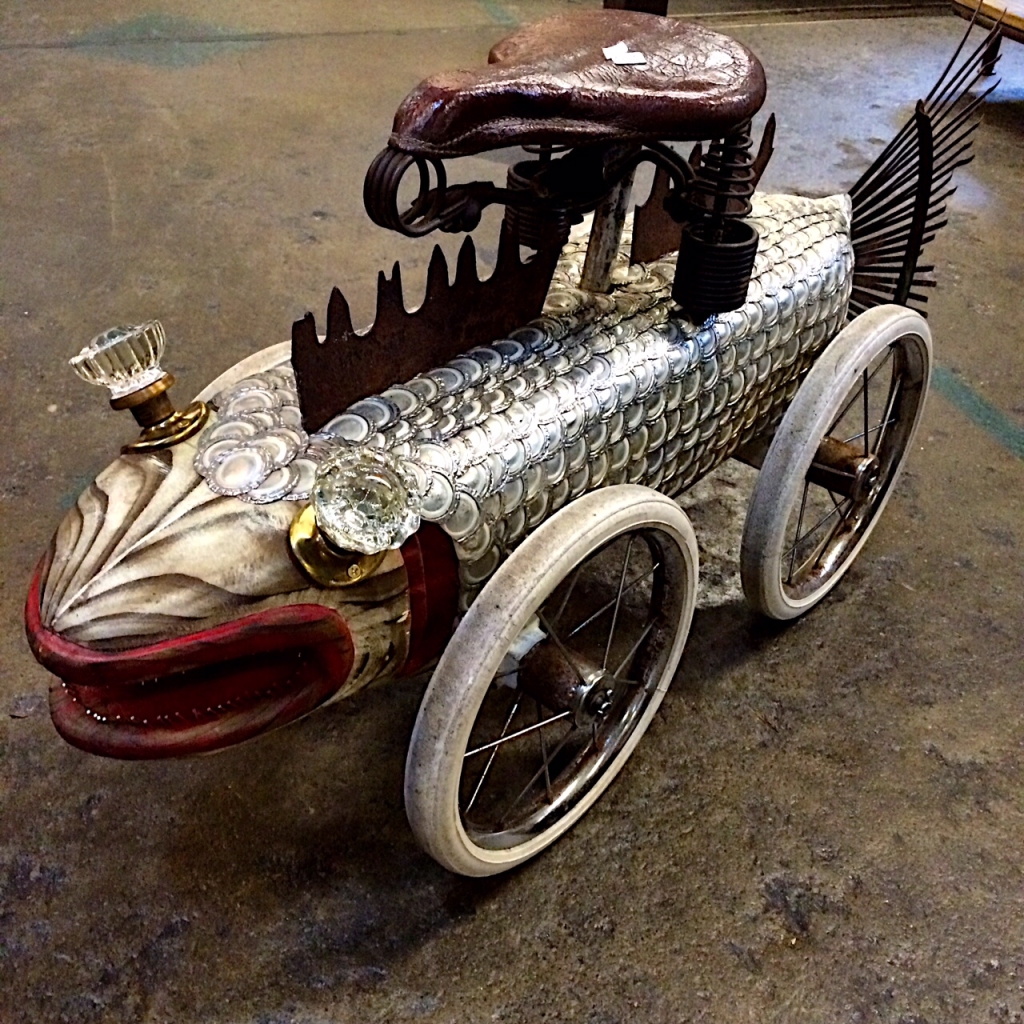 One of Steve’s more elaborate and unique sculptures. 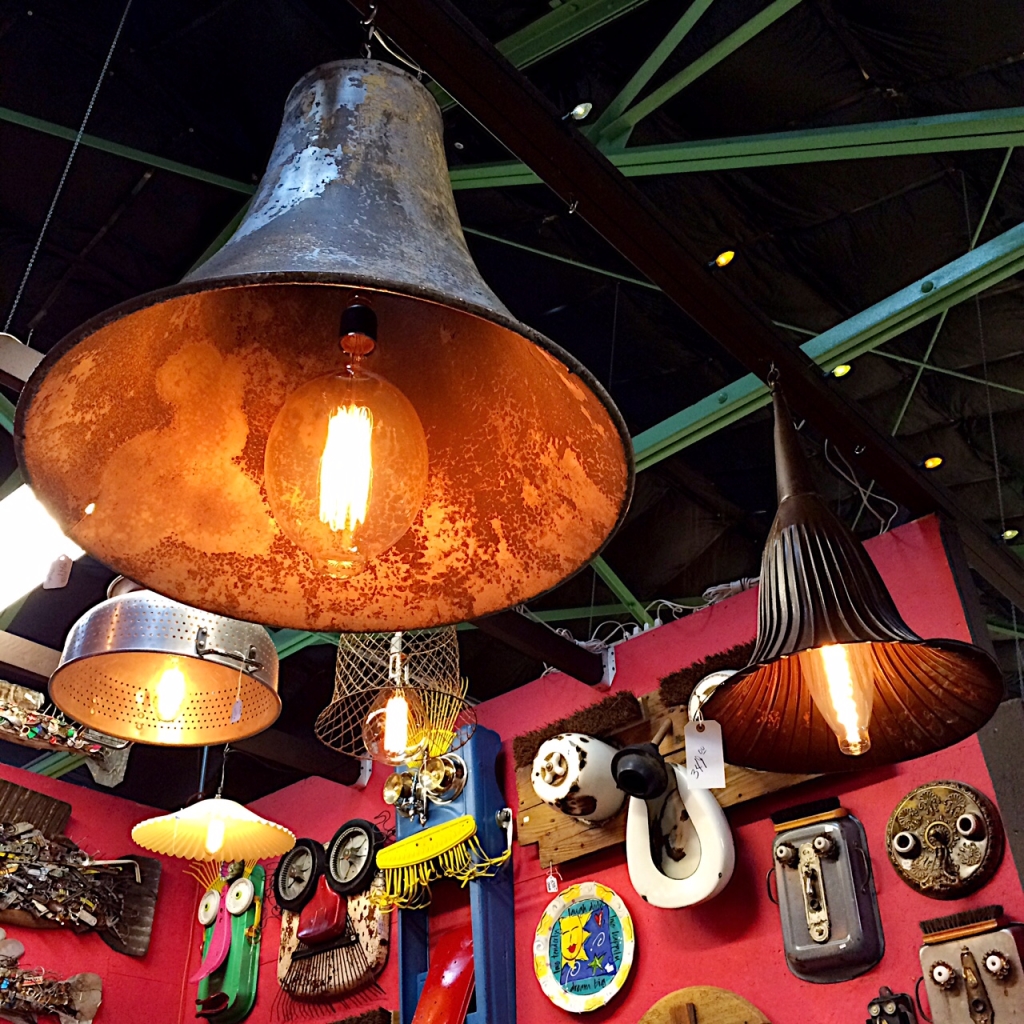 You know you need a colander light fixture!

Steve is based in Palestine, Illinois and has a gallery there, S.D. Meadows Folk Art Gallery. He spends the bulk of his time travelling to art shows all around the country, the biggest and closest one being Folk Fest in Norcross. He’s excited to meet his audience at Kudzu, and, though he’s a self-proclaimed workaholic, looks forward to settling down and travelling less in the future. We’re super excited to have him here as well, and hope you’ll stop by and check out his booth. It’s truly a work of art! 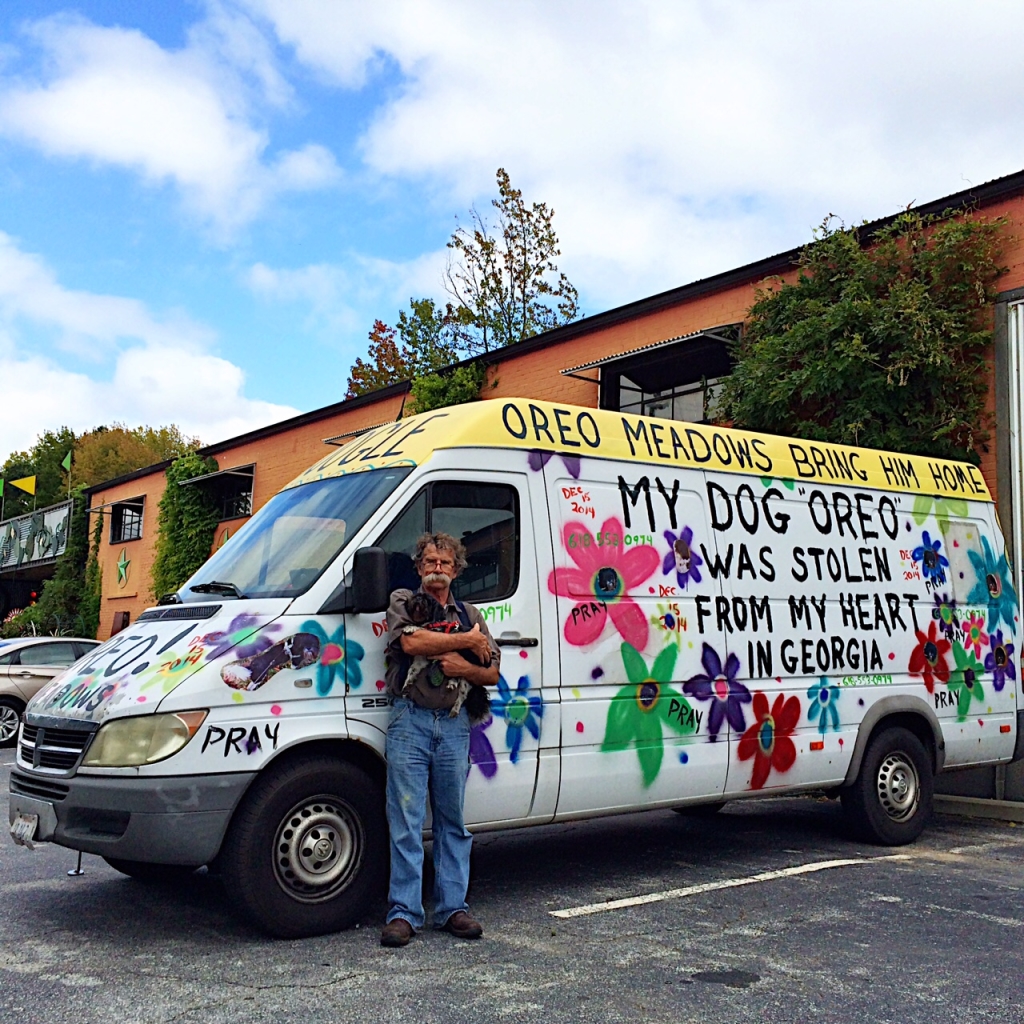 The Heartbreaking Story of Steve’s Sweet Van: Oreo, Steve’s beloved dog, escaped out a friend’s house this past December, and was picked up and passed around from one stranger to another. There was no description of the person Oreo eventually wound up with, so by January, out of frustration, the need for therapy, and to hold hope, Steve painted his van with his “Lost Dog” message. This hasn’t led to the finding of Oreo, but has led to Sterling, a pup that looks almost identical to his lost brother. Steve has found some peace with Sterling, but he still hopes to see Oreo one day soon.

About the Author: Kudzu Staff